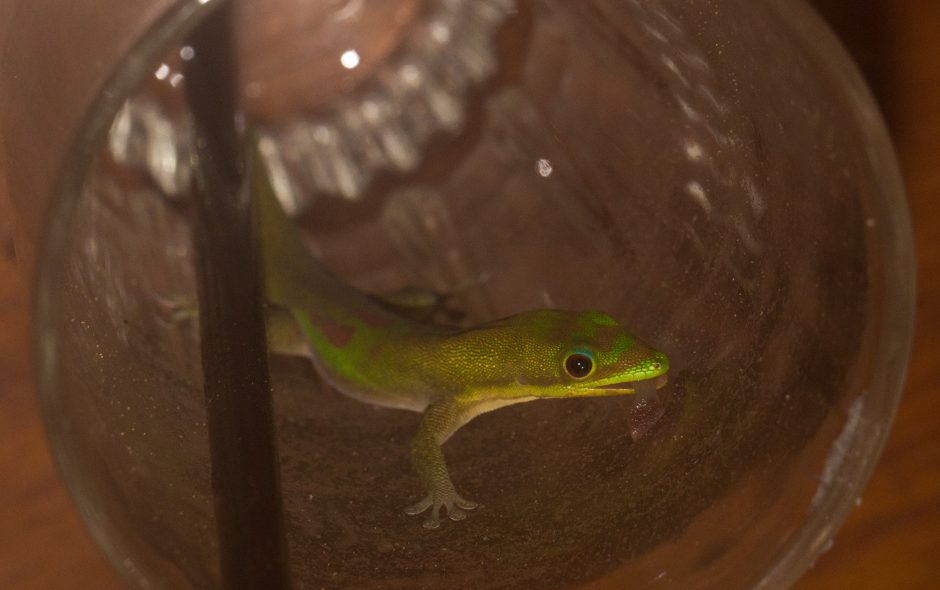 The spider is – to my great relief – not detectable in the morning. I deliberately did not light up the ceiling and I did not look under the bed. Since I’m up early anyway, I get up directly and sort my whole backpack apart with pointy fingers. It would be even creepier if I could carry such an eight-legged souvenir around with me!So bit by bit, each piece of luggage classified as “spider-free” flies to the veranda, so that I pack it one hour later there again bit  by bit into the empty backpack.

After the last breakfast in the Hotel Baobab, we leave comfortably for Ambilobe. Before that we pay and my bill – cough – amounts to 290.000 Ariary. For comparison: The bills of the couples of the group are all around 300.000 Ariary. For two people. Dumdidum…

Our first stop on the journey is about three or four kilometers before Ambanja in a cocoa plantation. Which you don’t enter if possible, but there is also a lot to find at the edge. Beautiful Furcifer pardalis males – and not only one! The next stop for the chameleon search is at the end of Beramanja. The road is well-traveled and you will have to jump to the side every now and then when another tired truck driver or a Taxibrousse passes by. After that, there is only a pee break somewhere in nowhere before Ambilobe.

In Ambilobe we first have lunch on the veranda of a small restaurant. What takes more than two hours, my zebu has to be slaughtered first (well, they forgot – which was unavoidable with the probably extremely rare event of more than 15 guests at the same time – somebody had to be hit). But my hunger is best satisfied with spaghetti, rice, and chips from my neighbors. After all, I learned today that you can eat a whole plate of zebu steak with its accompanying Pommes sauté in less than two minutes without any problems – once it is there.

We land in the Noor-Hotel, whereby the second O represents a star, which is why I first thought it was called Noir-Hotel. In retrospect, that would have been more appropriate. It turns out to be quite a catastrophe, but in retrospect, with a lot of beer and a healthy sense of humor, it was one of the funniest stations of our trip. Through a high green gate between white stone walls, one gets into the courtyard. Right at the left side under a kind of canopy, there is a wooden desk, in front of it, there are a small table and two benches with green cushions. This seems to be something like the reception. But the employees seem to have very little interest in guests, but this could be due to the massive consumption of Kath. Everybody has a ping-pong ball in his mouth. From time to time the green stuff changes its cheek, but otherwise, they don’t do much with it. And they don’t do much else either. They stare at everything, preferably through other people. And they stagger along. And they watch weird shows on the tiny TV. If they even hear and see it, you can’t be sure.

But in the end, we all get our door keys. I have a room upstairs. The stairs upstairs are of course not EU norm, so you have to be careful when going downstairs not to accidentally lie down on your face in spite of caution. Every time I fall one of the stairs more than I walk it because it feels being hip-high. Of course, there are no railings, why should there be? The foot-high wall must be enough. My room is pretty much the best. There is no mosquito net, but the air conditioning works! I cool directly to 24°C. That’s awesome. Outside it’s like walking into a wall again, but who cares, I have a working air conditioning! And the bed is also quite comfortable. As long as you are alone, you just sleep in the middle of a deep hole.

Okay, maybe I should also mention that my shower was nowhere to be found at first, but then I found something like a shower hose in a corner of the bathroom behind a blue bucket. The shower is practically the entire bathroom in one, very convenient. It’s also well thought out, because there is so little water coming out of the hose that it doesn’t even reach the sink twenty centimeters away. You just shouldn’t use so much shampoo, who knows if it will come out of your hair… plus points: My toilet works and I have a mirror in the bathroom. Well, the ceiling comes down and hangs about 50 cm too low, the fan doesn’t work either. But the geckos keep everything vermin-free. At least as long as I look. It’s a bit silly that my door doesn’t have a real lock, just a small, narrow latch. And at the bottom, there’s a slit (well…a pretty big one) open. But I always wanted to sleep tightly with my photo backpack, why not here? So sleep – until the air conditioner wants to be turned on again every time because of the six or seven power failures during the night. I also have my own entertainment program: the muezzin next door starts roaring at four o’clock in the morning. And next door isn’t quite right – it sounds more like he’s IN my bed. If I had a window somewhere, I would open it and shout back.

Thorsten caught a prison room in the backyard. After loud complaints, he gets another one, but there is no air conditioning there either. So it does exist, but it doesn’t work. He also has a mosquito net, it just hangs on the opposite side of the room to the bed and is therefore rather less useful. And even if it would hang on the right side, it would be too small.

Lore and Stefan, unfortunately, have no air conditioning at all and the toilet only works after many complaints, long lamenting and after all five people who stare at the broken toilet for a long time and do nothing before they fix it – very slowly, but still. They have the room directly in the corner on the right, in front of the Hollywood swing. Martin lives next door, also with him, the toilet only becomes functional after a lot of lamenting and a long “repairing”. Surprisingly, the hose that was supposed to flush the toilet ends up in a bucket instead of the toilet. What is used for showering is rather unclear. But at least you can pee, brush your teeth and “something like” shower at the same time. There is something to that! Air conditioners and mosquito nets are overrated anyway. And Stefan and Lore even have ruffles on their beds. We set up for an hour or two with THB in the yard around the Hollywood swing. Around 7 pm we go to a restaurant directly at some street in the middle of Ambilobe. Naina and Eric together with daddy supervise the grilling of the morning pre-ordered brochettes. There is also a bowl with cucumber salad-like contents, which probably wasn’t boiled. The skewers taste great with it anyway. Tough, but very tasty. I can eat 40 skewers, by the way.

Back at the hotel, we watch with interest how couples go upstairs again and again. Mostly only one person comes back – is this something like a Malagasy whorehouse? On all the hotel walls, there are lots of small, bright geckos. As soon as it gets dark and the few available light bulbs are turned on, they start eating fat on the attracted mosquitoes. When photographing the geckos you just have to be careful that there is not so much mold in the picture.

Anyway: Ambilooooooooobeee should remain a familiar word among the inhabitants of the Noor-Hotel for a long time. It is a pity that we did not buy some t-shirts from the hotel. One could recognize everywhere by the grin if this person has ever stayed in the Kath-Zombie-Metropolis Ambilobe.

4 thoughts on “Of kath zombies and a muezzin”