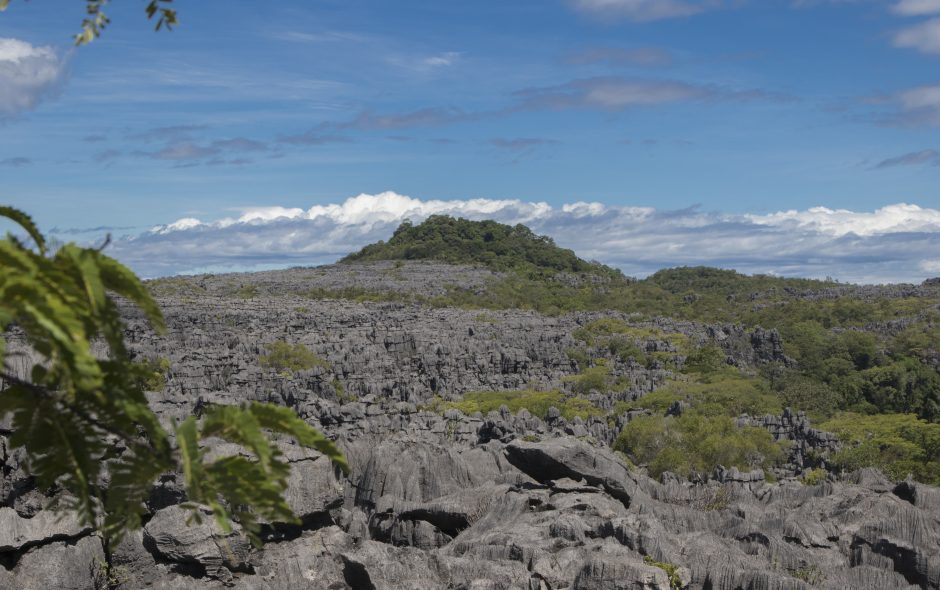 I’m dog-tired. The annoying muezzin, the air conditioning that has to be turned back on, the countless blackouts… and it’s not just me. Most of the group are about to fall asleep. I’d like to sleep on the floor.

We’re not staying in Ambilobe today. We take our breakfast again at the market. Super tasty fried bananas, one or two bottles of coke in addition, ready. But that does not wake me up. With the Landcruisers, we drive to Ankarana. The road leads up, the view is fantastic. One looks over the flat, light green country up to the mountain ranges in the far distance. Many bushes, herds of zebu, single small huts… …a little savannah-like. We end up in a small village called Mahamasina. On the left on a parking lot is a white building, apparently something like the Park Office. I am hungry again. And tired. On the gravel parking lot, there is a skinny dog running around, which likes to be cuddled and obviously enjoys the caresses. After a short break, during which we order our late lunch for later, we walk along a very narrow dusty path dug deep into the ground to a kind of parking lot. Already directly in front of the car, we find a smaller snake. From the parking lot, there are trails between yellow-red grasses leading into the national park. My group is guided by Angelin, whose good mood is really contagious. He leads us down a provisional path with steps to a wide, dry river bed. It is a bit eerie to walk to the other side between the huge, round, smooth stones. During the rainy season, it is not possible to get through here.

The forest resembles a little bit the one in Ankarafantsika. Huge trees everywhere, we cross big “gates” of branches and pass tree trunks under whose roots I can easily walk. Okay, there was only one of those! Finally, we reach a small wooden platform from which we can see far above the grey Tsingys. A great photo motif, but somehow too grey for me. Somehow impressive, but grey. After a small drinking and T-shirt wringing break we leave the platform to the right towards the Tsingys. The path consists only of light grey stones, you have to look very carefully where you are walking, otherwise, you will soon be lying on your nose. To the left, the Tsingys extend as far as the eye can see. At the edge of the stone path, there are all kinds of bushes, some great trees with big white flowers and also the water-storing “bottle trees”. Somewhere on the stones, we take a breather.

At some point, we actually reach the “endpoint” of our hike – a slightly higher vantage point. To get there, one has to cross a long suspension bridge. To my astonishment, this proves to be extremely stable and very well fixed. Because of the trees growing between the Tsingys it doesn’t seem so high so that my fear of heights doesn’t stand a chance today. At the other end of the suspension bridge, there is an extremely narrow path up between very high rocks. Who weighs a little bit more than I do here might have problems to get through. Claustrophobia would be out of place! At the top, one is rewarded with a great view. Whereby the view seems a little white and naked in between, which is mainly forced by a certain tour guide on the exactly opposite side of the rocks. But only very briefly. But it was enough for a proof photo!

On the stone path and also on the viewpoint we meet some other tour groups. The way back becomes more strenuous than expected. Although we still meet one or two sportive lemurs in knotholes, which are really cute, even the big leaf-tailed gecko is only a short photo motif. For a small leaf chameleon all of us place ourselves on the ground with their bellies closed. The little runt probably never had as much attention in his life. It is getting a bit exhausting with the temperatures. At the end of our visit to Ankarana National Park, we visit a huge stone hole, several hundred meters in diameter. Giant stone steps lead down. It is the outflow of the above-ground rivers in the park, which all tired here in the rainy season. From here on they run underground. All of Ankarana is crisscrossed by these tunnels, they form the largest underground cave system in Africa. We take a small break before we go back to the starting point of the day.

Only a few huts further on is a restaurant where we take a seat at the long tables. There are crabs, fish, and other delicacies for very little money. The food is delicious. After a while, I sit down on a bench in front of the hut to enjoy the sun a little. A curious little girl watches me from across the street. A little boy in blue pants is chasing ducklings and finally stumbles over one, which his mother acknowledges with loud scolding. The duck parents are housed in a kind of basket made of bast.

I look for a balloon from my backpack, blow it up and draw a smiley face on it. Without the girl understanding a word, she accepts the balloon with thanks. Her name is Florentine, by the way, and she is the daughter of the man who supplies the restaurant. I think so.

Back in Ambilobe, I’m dead tired. It is just enough to drink two THB in the small restaurant from yesterday and to eat a little something, then it’s off to bed. By the way, Tanala gives a great massage.