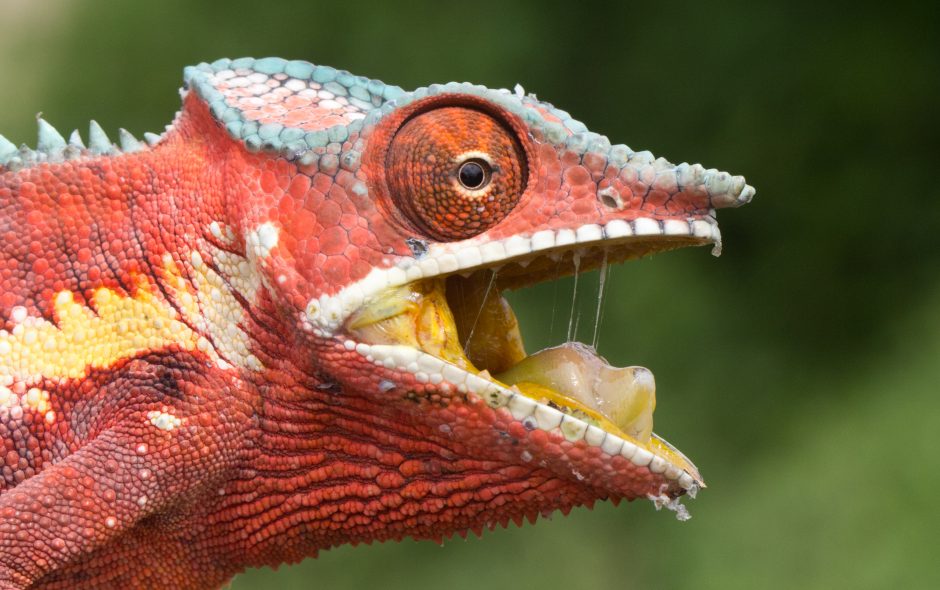 What I didn’t know last night: There is no sleeping at 30,9°C and without air conditioning anyway. The air is so extremely stuffy that at about three o’clock at night I open the window at some point because it is simply not bearable in the heat. As a result, a million mosquitoes follow the delicious smell of human skin. I spend the next two hours struggling with the hum, the fan, the mosquitoes, and the heat.At five I give up, put on my clothes and sit on the small veranda. Here at least the air is good and it gets light. Two hours later the other people finally arrive and wake up. It takes forever until breakfast is served. But patience pays off in Madagascar.

We leave for Ankaramy around nine o’clock. Off to the panther chameleons! Whereby Ankaramy is the river, the village itself is called Ankaramibe, which means “big Ankaramy”. In Ankaramibe the team drops us off behind the town sign and we stroll through the village. By the way, in the middle of the village, there is the most useless zebra crossing in Madagascar. The Taxibrousses pass it completely undisturbed, nobody uses it – but it exists. What it is for and who painted it, nobody can explain to me. Of course we also find Furcifer pardalis, the “pink panther” – although they are not pink, but rather a dirty red. But pretty! In a restaurant on the first floor you can get a liter of Coke and THB. You walk through the ground floor into a kind of hall, where it smells musty like grandmothers in the cellar. On the right, a small naked staircase without railings leads to the first floor. We place ourselves on the roofed terrace. Thorsten is sitting on three plastic chairs at the same time, because all of them are a little bit broken and together they just hold together. Funnily enough there is also an old stereo and a similarly old tube TV on the terrace, but there are no electric cables. Who knows if something works?

From Ankaramibe we go to Djangoa. The landscape reminds me again rather of a rainforest, everything very bushy, densely overgrown and green. Every second tree is a mango tree. Also here we search (and find) at the roadside panther chameleons, great animals. We continue to Ambanja, a long extended bigger city with 20.000 inhabitants, which has many more inhabitants than one would expect when driving through. But apparently the huts and villages around it count extremely many inhabitants. Ambanja is finally huge and pure chaos and dirt. Along the road around Beramanja, we find besides chameleons also a nice spotted frog, which nobody can really assign to an existing species. Maybe it is just not in the field guide yet. Or it is not described at all. That happens quite often on the island.

Then we head for Ankify and as we drive around a small bend I suddenly see the sea. Finally! Bright blue-turquoise it is only a few hundred meters away, a white beach, lined with palm trees. Paradise again. We end up at the Baobab Hotel. The main building is a bit elevated, the bungalows are arranged around it and really luxurious. Roundhouses made of stone with the usual roof, a big bed in the middle and a separate white tiled bathroom area. First I take off my shoes and before the guys have unloaded the luggage I walk on the beach and stretch my feet into the bathtub warm water. A little later I have to look for my luggage, it had been put into the trunk of another Landcruiser this morning because one of the team needed some Ibuprofen. But no problem, everything is found quickly and uncomplicated. Before I can hop into the sea, I have to order some food for the evening. In Madagascar, you sometimes need a little longer to cook. But then… the sea is warm, because of the salt content you always float on the surface without lifting a finger, the sky is blue (okay, a few small clouds), Nosy Komba and Nosy Faly are in sight (I ignore Nosy Be).

In the evening we meet in the restaurant, up the stairs, and past the comfortable armchairs. There are fish skewers with rice. I don’t really like fish, but it tastes really good! And after that there is THB as always…and even more THB… suddenly a group of Sakalava appears. They come from the village and earn some money with dancing and singing, but they also want to give the strange white people a little bit more information about their culture. The Salegy is a pretty wacky dance with lots of ass wiggling and enormous muscle demanding acrobatics. Well, I couldn’t do it. Later I fall into bed and fall asleep right away.