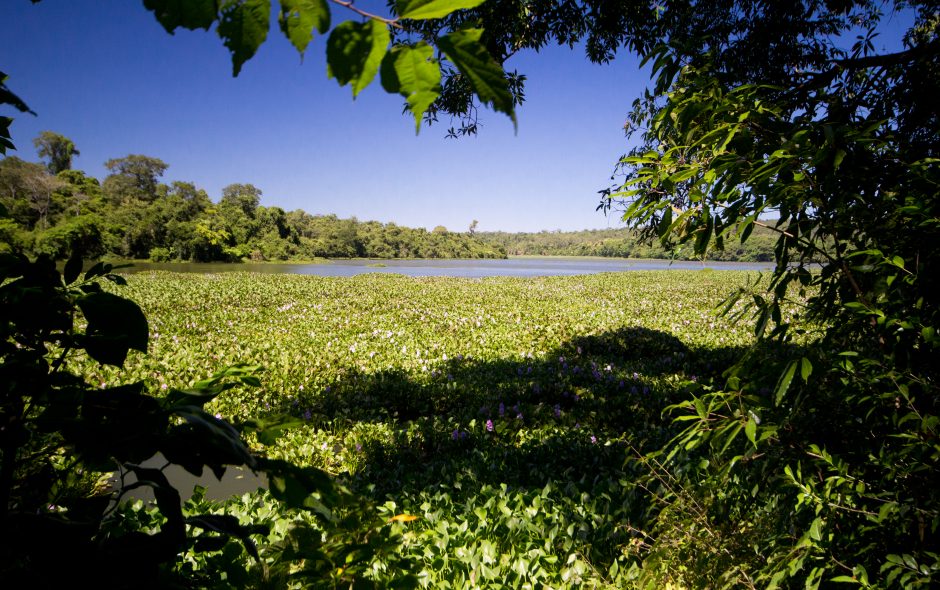 All night long I’ve been rather humble. circulation, stomach cramps, nausea – the late revenge of the frog? No idea. I feel better in the morning, but I still feel dizzy. But at least I can say that the stars above Ankarafantsika are amazing – I had enough time to observe them tonight.

For breakfast, we have a deep-fried baguette, laboriously and time-consuming fried in very small pans, Makasaoka (something like French toast) – surprisingly, the high fat helps to calm the upset stomach. Today I go with Andrea, Anto and Dimby for a “leisurely” round six kilometres around the lake. One group will go around the lake Ravelobe in the opposite direction, the third will go into Ambalabongo Canyon.

It is unspeakably hot. We walk up the road to the left, past many wooden stands, where neatly lined up plastic bottles with mango and other fruit salads are offered. At some point we turn right towards the lake on a red sandy path, passing a warning sign pointing to the crocodiles of the lake. In recent years, there have probably been some human sacrifices when people have ventured too close to the lake. The path leads along the left side of the lake, first of all along with many stones, which are completely flooded during the rainy season. We find a Furcifer oustaleti male.

The “only” six kilometers stretch endlessly. Not only that Andrea and Anto walk extremely slowly (right at the beginning we already meet the other group, which has already completely circumnavigated the lake), walking here is incredibly exhausting. I am mostly busy breathing and putting my feet in front of each other. My head is buzzing, I have a wet towel on my neck and drink several liters of water as soon as we stop for a short time… everything is of little use, my circulation is no longer in the mood. But in the end, it’s all about something and the lake and the dry forest around it can only be enjoyed. Most of the lake is covered with water hyacinths – actually a miserable plague, but somehow the pink carpet of flowers is also beautiful. All around the lake, the shore is extremely densely overgrown. Croc paradise! The way leads partly up to half a meter to the lake, but we only see crocodiles swimming in the distance. Nevertheless, we pay attention to every movement in the water.

On the tour we find some Mimophis mahfalensis (harmless snakes) patiently posing as models, a Furcifer rhinoceratus chameleon female and again and again curious plated lizards crossing the path. The plated lizards are hardly shy and many can be approached within a few centimeters. During a stopover at a hut, we find large Nephila in their nets. The spider threads are so thick and stable that you can pluck them with your fingers without breaking them. To the right and left of the hut are two wooden statues showing King Radama with a crocodile. Lac Ravelobe is fady, which means holy. The crocodiles embody the resurrection of the king (or something like that) and are even fed once a year at a big feast. They are not allowed to be killed and have therefore increased from 2001, when only 70 animals were counted, to an estimated few hundred individuals today. Anto, who actually looks into almost every knothole, discovers a large Acrantophis madagascariensis under a fallen tree stump. Unfortunately, we can’t get it out of the hole – a rabbit would be a great deal now. In a big tree we also discover a Blaesodactylus ambonihazo, which disappears deeper into the tree with the first flash of lightning.

On the other side of the lake are two baobabs, the last two of their kind. A third one was cut down by a cyclone this year. It is unbelievable with which force the wind must have torn this giant tree out of the ground. The tour around the lake ends with a very small short suspension bridge over a small river, which then leads to a wooden footbridge through rice fields. Finally, we go back a little bit on the road and we are back on the campground. As soon as we arrive there, we find some Coquerel Sifakas that have settled down on the trees directly on the terrain. They are sitting just two meters above our heads – and in such a way that they can be photographed perfectly. It is not quite clear who is watching whom in the end.

The group that comes back from the canyon is pretty much destroyed. With a good 40°C in the plain and 12 kilometers of march, everyone has reached their limits. Since my head still doesn’t quite agree with the local climate, I will probably prefer to walk around the lake again tomorrow rather than into the canyon. For dinner, there are Brochettes (skewers) with tuna spaghetti and self-made fries from Eric and Naina. Later on, the guys in the kitchen come up with some beer and rum. With English, German, Malagasy and hands and feet to communicate, it becomes a really fun evening.

One thought on “The Revenge of the Frog”