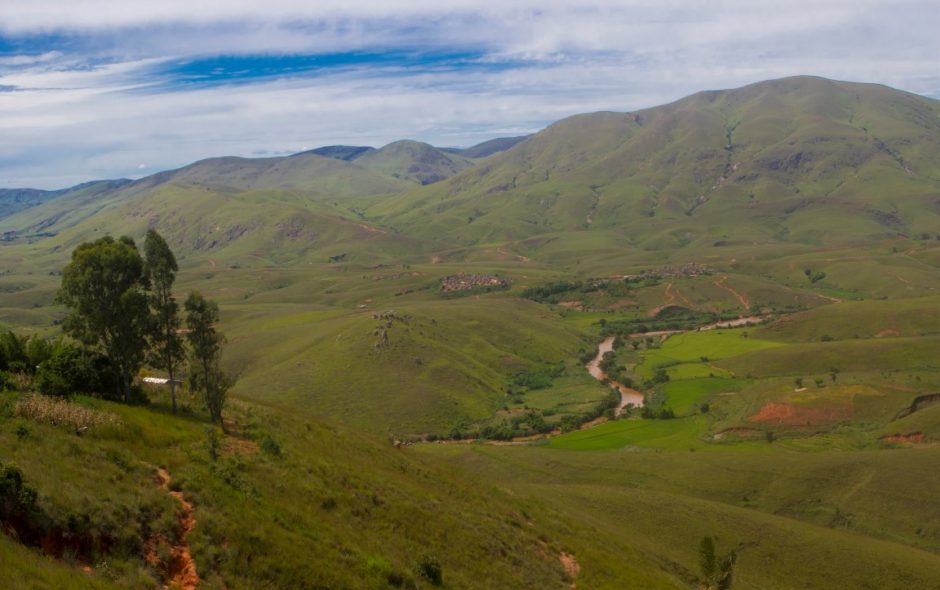 We meet at seven for breakfast. As everywhere in Madagascar, it takes time until everybody has his morning meal, the kitchens are not so big and nobody is in a hurry. But at some point, everyone is finally provided with tea, juice, scrambled eggs and baguette. Meanwhile, the guys outside artfully pack our luggage in tarpaulins on the roofs of the six Toyota Landcruisers, with which we will be traveling from now on. I am driving with Dimby, Antonella and Andrea – and thankfully I am allowed to take the passenger seat. It makes my stomach especially happy.

It’s a long drive. Very, very long. For hours we drive on winding roads, but the road condition is quite good. However, you can’t go more than 80 km/h. The highlands are enormously hilly so that you have actually always a great view. Unfortunately, an endless amount of hills has been cleared. 30 years ago, most of the area was a forest, today everything is bare. The huge bare moon landscapes make me thoughtful and sad. So much beautiful land devastated and it is not even used anymore. Around noon we reach warm areas with more trees – extremely warm! Dry forest, 38°C in the shadow. I am covered in sweat, sun cream and a good load of AntiBrumm.

We stop at noon so that especially our team can eat something. The Landcruisers stand in the driveway in front of a red building, but the guys go to eat opposite. Heidi and Armin follow them to the restaurant, the others stay with the cars. I drink a coke, a drunk old man speaks to us in French, but only gets answers from Thorsten in Malagasy. He quickly leaves. From the neighboring hut two little boys look out and watch us curiously. At some point I have to go to the toilet, we are shown the way. I open exactly one door, then I spontaneously decide that this time the bush toilet behind the vegetable garden is more practical for me too (the “toilet quality indicator” strikes). When I open the door, a swarm of flies comes towards me, it smells like shit, the same one is standing about five centimeters high on the ground. The toilet bowl can only be recognized as such with difficulty. The open-air toilet, on the other hand, offers practical holes in the meadow (you just shouldn’t fall in) and a nice bush as a toilet paper replacement. That’s working. In contrast to the grasses yesterday without sharp-edged leaves.

On the way we are overtaken several times by a bright pink Mercedes bus, of course, a Taxibrousse. One time the driver almost hits us, another time he hangs in the curve only barely on two wheels. Poor crazy.

47 kilometers before Ankarafantsika we stop at a petrol station. I get the key for the toilet or better, the girl from the gas station opens the door – now I can’t use the toilet, even though it is not very inviting. Outside, young girls are walking around with tin bowls on their heads, on which fried frogs are piled up. I ask Dimby if you can eat it – you can, and poof, I eat my first frog. The fact that they taste like chicken is not a lie, but absolutely true. A little later it gets dark again,  sun sets around 6 pm. Meanwhile, the road is teeming with potholes, but that’s no problem for our team, then you just drive in oncoming traffic or next to the “road”. In pitch darkness, we arrive at the national park Ankarafantsika. Patrick and Thorsten pitch the tents under small huts on sandboxes surrounded by concrete. Our kitchen crew has already driven up and is already busy with dinner. The campground has an open hut (i.e. a few stones and a roof) as a kitchen and two more huts with benches and a long table. Right behind the shower and toilet houses there is a restaurant, but we don’t eat there, Naina and Eric cook too well! But you can buy beer, coke, and water there.

For dinner, we have thick, small sausages (interesting taste, but not mine) and in addition as always rice. The leftovers go generously to the dogs of the park, who reduce their escape distance from ten meters to ten centimeters within a few minutes. The four-legged friends probably also have some catching up to do when crawling – as soon as I have crawled the head of the somewhat brisker male dog, he demonstratively presents himself in such a way that the rest of the body also wants to be massaged.

In the evening I have the first near-death encounter with a Huntsmen spider. The stupid, huge animal sits on the door of all places when I want to leave the toilet. The attempt to open the door as carefully and slowly as possible fails – the nice little animal jumps a few centimeters beside me against the wall and flees. Which, at least if someone was already asleep, woke everyone up again. Fortunately, it remains the (almost) only encounter of this kind on the whole trip – and that’s pretty good on average, I think. Well, afterward I decide without further ado that the bushes are safer at night or at least save such acquaintances.

Finding of the day: bushland is something very nice, and one should not ask for too many toilets in Madagascar.

One thought on “Madagascar’s toilets”