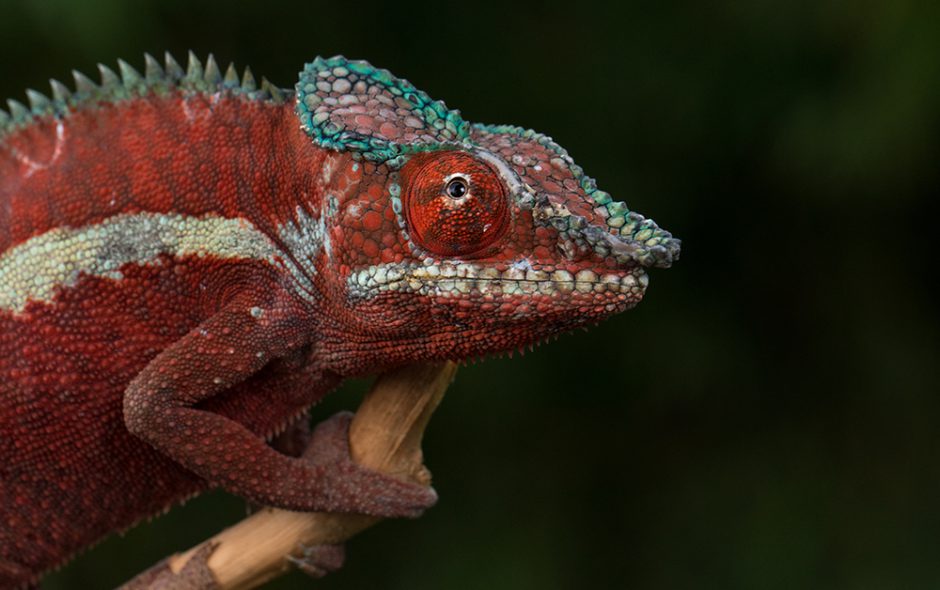 Sometime tonight, unfortunately, the air conditioning went off. When the room temperature reached a comfortable 35 degrees, I got up and pressed the buttons on the remote control. Contrary to my expectations, the air conditioning went on again. And cooled down to a freezing 25 degrees. Then I got up again to get a little bit of Antibrumm mosquito spray. The mosquitoes here are nasty.

At six o’clock it is then time to get up “properly”. The baby Hemidactylus on the wall is gone. Tanala brings the suitcases to the parking lot, I search with the camera for day geckos in the palm trees between the bungalows. It still seems to be a bit early, only a few Phelsuma show up. Among them a Phelsuma laticauda female with pronounced lime sacs and a Phelsuma dubia. By the way, now I discover in the light how huge the hotel has become. On the restaurant building, which until then had two floors, last year three more floors were simply added. Huge and clunky the square block now towers into the sky. The first construction workers – unsecured, of course – are already prancing around on the shaky scaffolding.

Breakfast is back at Chez Mamie. Rice cakes, omelet without everything – also without salt – and cola with a light fish touch. The trick is to wipe the Coke bottle thoroughly once before opening it. It is simply stored in the same freezer as the fish. There are even ice clots floating in the cola. Philip observes with interest an ichneumon wasp, which apparently hunts a small gold dust day gecko. The mood at the table is good, everyone is fit again.

Gris’ Landcruiser has been clattering since yesterday and apparently it still does so today. Therefore Gris and Christian spontaneously remove the rear left tire on the gravel parking lot. Unfortunately, the guys forget to put a jack under it, whereupon the car sinks down with a loud rumbling noise. The brake now has a nice dent. After more than an hour of repairing they are done. But I guess it was the suspension that clatters there and not the brake. Gris and Christian catch up on their breakfast quickly and Gris just eats right out of the huge rice bowl.

Finally, we drive off. Gris’ car clatters just like before. But obviously we know now that nothing dramatic is clattering. We stop at the gas station to stock up with drinks for the day. Antsohihy is just waking up. On the street, there are a lot of people on the way. At a small wooden stand opposite three women are having breakfast, a chicken is sitting between their feet. The sky is azure blue and streaked with many small white clouds. I am already sweating. But the braided hairstyle is already paying off, at least my head is always pleasantly cooled.

Then we head north on the RN6. The landscape consists of many small, gnarled trees in large savannahs with high zebu grass. Again and again, small and bigger herds of zebu are on the way. Some trot over the road. Then the landscape changes to more palm trees. Everywhere you see red earth, on hills, next to the road and everywhere where no grass grows. Somewhere in nowhere, we stop just behind a village of huts. Dimby asks who we have to talk to here for our trip to Sahamalaza next year. Electricity and water could probably be a problem because there is simply no such thing. But the people in the village could provide food. I unpack coloring books and pencils with Fitah. When Tanala and Dimby come back from further back along the road, a whole crowd of children follows them. We distribute plenty of coloring books and the children are very happy.

The road gets worse the further north we go. Most of it is still passable, but there are some sections where there is no asphalt at all but only laterite and sand. Already a good distance before Ankaramibe, we discover one of the panther chameleons typical for this local form. It just wanted to cross the road. The cameras click. We put it back on the roadside between banana plants and ravenalas. As I get closer to one of the Ravenalas, a peculiar Furcifer oustaleti female with blue eyes passes by on the left side of my feet. The strange thing is that it has no tail. Where once there was one, there is a huge scar on the hip of the female. In a way, she was probably lucky – a few millimeters further ahead, and she would probably not have survived the injury. The first panther chameleon of the journey is beautiful and shows great red colors. Of course, it is already warm and we sweat a lot while taking pictures.

Arriving in Ankaramibe the sky has closed in. Grey clouds hang low over the city and the neighboring hill. Drizzle sets in promptly as we get out and swarm out to look for animals. The students of the nearby school have just returned from their lunch break. Within a short time, a whole bunch of children gathers around us. Obviously, watching bizarre Vazaha is much more exciting than school. Only little by little the pupils continue to walk, some even stay until we leave again. José discovers a small male panther chameleon which is unfortunately quite nervous and jumps directly from the offered branch. But only a few meters further on a full-grown male of the same species appears, who is completely chilly and can be photographed in peace. We also discover a black and orange female in the bushes. I walk down the path towards the main road, cross a small bridge over a creek and look at what Markus has discovered. He is looking for certain Phelsuma, one he has just spotted at a hut.

The drizzle decreases and we get back into the Landcruisers. Actually we want to stop in Djangoahely or a nearby bamboo forest to look for a rare day gecko species. Unfortunately, nobody listens to me when I say that we just passed the town sign of Djangoahely. Tanala asks Gris if this is Djangoahely already – “No!”, Gris says and asks the others the same over his radio. They are also of the opinion that Djangoahely should be closer to Ambanja. So we drive on. And on. And further. We pass several bamboo groves, but none of them seems to be the right one. After a good 30 kilometers, we pass Berambo as well, after that there is definitely no village with “Djangoa” in its name. The guys stop to consult each other. Thereby they notice: Ooops. We’ve already passed Djangoahely. That’s too bad. I guess we’ll have another try next year.

On the way to Ambanja we spot two or three beautiful panther chameleons from the car. Ambanja is chaotic as always, loud and colorful. A completely overloaded, huge truck drives in front of us and absolutely does not want to be overtaken. The loading area is bulged out on both sides, the whole vehicle is swaying menacingly as if it wants to tip over immediately. With completely idiotic driving maneuvers the truck driver tries not to let any of our Landcruisers pass. Only at a huge crossing Gris, Christian, Mamy, and Léon can push past.

We’ll reach Ankify around five. Through the gate, we drive to the graveled parking lot of the hotel. The beach is already in sight. Joel, who prefers to pronounce himself “So-ël”, takes care of the first THB even before the rooms are distributed. Dimby’s and Christian’s Landcruiser including crew is still missing. They show up a little later. 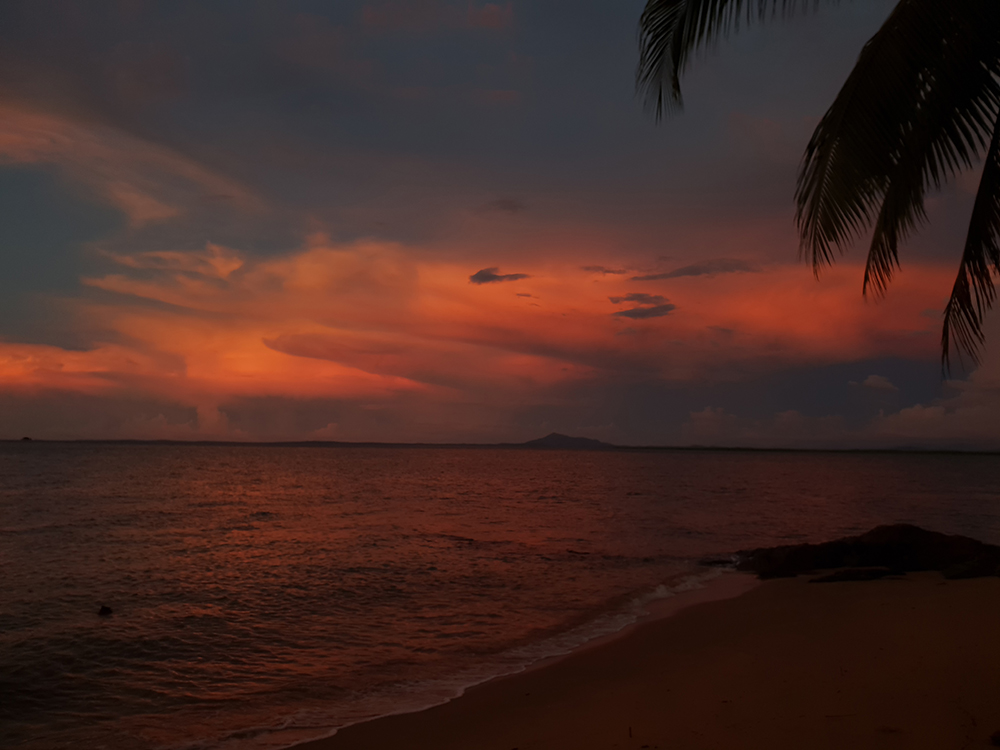 Just in time for sunset, I sit in front of my bungalow directly on the beach. The sky turns pink, the clouds above Nosy Komba glow in dark purple. The colorful spectacle in the sky lasts only a few minutes, then the whole horizon turns deep blue. Shortly afterward it becomes dark.

For dinner, we all meet upstairs in the open restaurant with the huge palm leaf roof. A light wind blows and drives away the heat of the day. On the horizon, weather lights flash. The food is amazingly good – is that supposed to be the little fat cook? Indeed. He proudly comes out of the kitchen to receive unusual praise. At the end of the day, after very good steaks, there are flambéed bananas, which Joel lights directly at the table. He also rather half-heartedly chases away the slim, white-red cats, which are now three. Marco is, unfortunately, a little afraid of the little tigers, who actually don’t want anything from us. At most a bite of fish or meat. But they also take bread if necessary. Marco’s intestines are rather not on the menu. 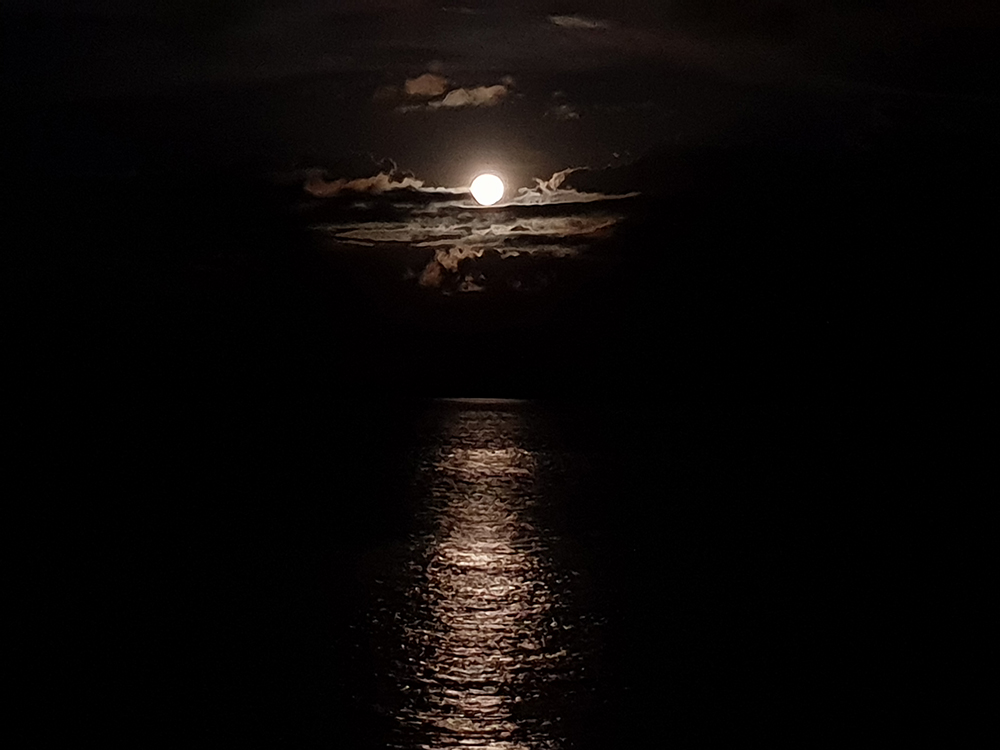 Directly behind the restaurant, a huge moon shines, which casts a beautiful light on a few clouds and the sea. Unfortunately, I am a little late with the camera, clouds have already pushed themselves directly in front of the moon. At the beach flashlights light up. They are probably fishermen looking for crabs and crabs. After a final rum, everybody goes to bed – queen size beds, by the way, you can sleep in them longer.