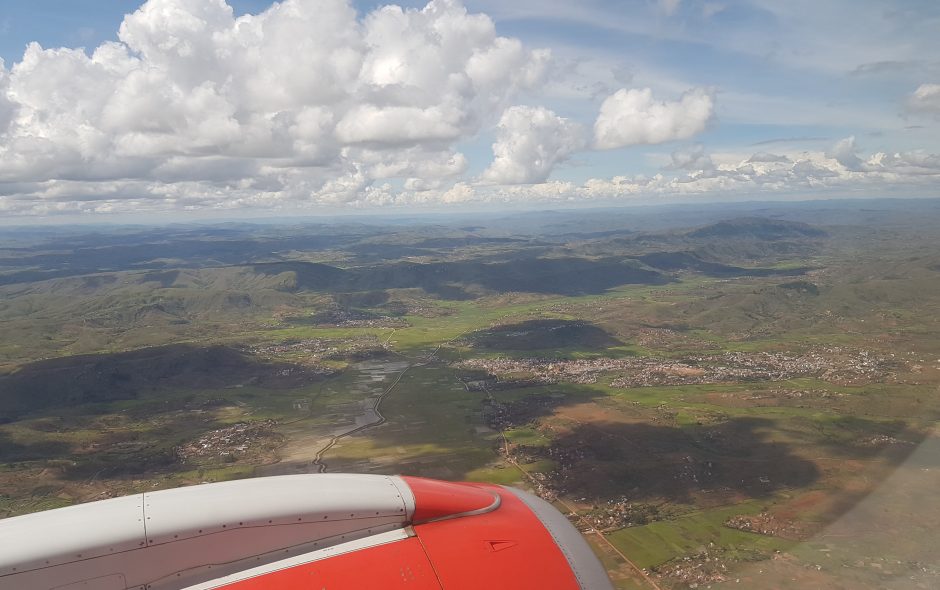 The flight sucked. Luckily I had two seats instead of one and even sat at the window, but unfortunately also directly above the turbines. During the 11 h flight with Air Austral, there was no real sleep. Never again a long-distance flight like that! During the landing on Réunion, I got really sick. The first step outside… I run into a warm, damp wall. Luckily there is a (boring) hour’s stay in the small airport under a wooden roof where small tropical birds fly in and out. So at least for the flight to Antananarivo, short Tana, I don’t feel so bad anymore. On La Réunion, I get a small, three-sided leaflet in my hand on arrival. I need to fill it, they need it for the visa. Besides the usual information like name, profession, length of stay and co., Madagascans also want to know if you are vaccinated against yellow fever or if you have been abroad somewhere else. And the names of the parents are of course very important!

Arrival in Tana. The smaller plane lands a little rough but safe. The door opens and everyone runs straight onto the runway. So this is Madagascar. The airport building has triangular roofs and looks rather small. Well, small compared to Francfort. I just run after the other people, along the building and finally to the door international departs into the building. Then we all stand around. There is a “visa” and a “non-visa” exit. But the first thing that catches your eye is the huge Orange Tel advertisement. I get in line with the long non-visa queue. And it takes time and it takes more time… Mora mora! At least I get to know a part of my group while queuing: Heidi and Armin from Stuttgart, Gerd and Elke, Martin, Stefan and Anja. None of them has been to Madagascar yet and accordingly we are all equally helpless.

Five employees sit behind glass panes in a square counter. The first one hands in his visa paper together with his flight ticket and passport. The first employee looks at the whole thing with interest, passes everything on, the next employee looks at it with interest and passes everything on. The third employee not only looks interested but also puts a stamp in the passport. Okay, then he looks interested. After about 20 minutes, the documents have reached the back end of the counter – about 1.50 m from the front end – and you wait to get the right passport with a registered visa. With signature, the fifth employee is responsible for that. At the same time the employees make some jokes, which I don’t understand because of the lack of Malagasy. But I nod with a smile… always smile and wave! Finally I have my passport back. And I walk to the opposite treadmill. Little by little the luggage pieces trickle in.

Then I sneak to the exit, where Thorsten already greets us and leads us to the door to the rest of the group. From there we go to the end of the parking lot to a green and a red bus. Thorsten splits us up into the buses and a huge amount of Madagascans stow their backpacks on the roof. Who of them belongs to the team or not is completely opaque. But it clears up quite fast because the men from Tana, of course, all want a tip. Unfortunately, I really don’t have anything with me and especially not in Ariary. The men become more and more obtrusive until Thorsten rudely approaches them, throws the most obtrusive ones off the bus and simply stands demonstratively in the door. In addition, there is a grinning “Welcome to Madagascar!”. When the luggage is finally strapped down, the journey begins. We drive to the Résidence de Raphia, a hotel located only a few kilometers from the airport. I hardly get the first impressions of Tana, I am tired, haven’t slept for 36 hours and I am still half sick from the flight.

Finally, the bus maneuvers backward into a narrow gateway between high walls. Behind it is the hotel, but we will not stay there overnight today. Later on, we will continue directly to Andasibe. The hotel is a big bright red stone building, some steps lead to the reception behind thin glazed white wooden doors. To the left of the building, there is a tennis court, in front of it up to the wall there are some meadow and gravel with tables and chairs. I join the already seated people, get a huge 0.68 l-THB with my just learned “Azafady, labiera iray!” and order some Sambozas to eat. The beer tastes extremely well at a warm 25°C, little by little I am getting reasonably fit again.

Later money is also exchanged. I am suddenly in possession of money in large and small bundles, and honestly, I have no idea where to put all that money. I am practically a millionaire now!

After one or two hours – my sense of time has long since disappeared – we set off for Andasibe. The busses take us right through Tana. Tana is huge and completely overpopulated. And poor. Everywhere there are small, self-made wooden huts between colorfully painted or simply dirty stone houses. Again and again, you can see houses painted in THB-colours or huts used as advertising space. In between wooden huts with banana leaf roofs or corrugated iron. Nowhere you can look inside because doors and windows are usually just black holes. Children everywhere, an unbelievable number… over 60% of Madagascans are under 15 years old and you can see it. Many walk barefoot, some wear flip-flops or worn plastic shoes. Between the people, again and again, zebus and zebu carts, high-legged chickens and emaciated dogs jump in ditches and on hills beside the road. Every free space is covered with garbage. Between the huts, there are rice fields everywhere, in whose brown broth not only people but also zebus and geese stalk around. The traffic is chaos. Everywhere the bus squeezes through, honking and holding on to it is the motto. The tarred roads change again and again into red, unpaved side roads. Where there are power poles, they are tapped in an adventurous way by the surrounding residents. After a little eternity, we are finally out of Tana, the city of the 12 hills. We are heading towards Andasibe.

The route continues and goes deeper and deeper into mountains and forests. Every now and then we overtake slowly crawling trucks, which seem to be so overloaded that they can hardly move forward in the steeper and more hilly roads. The road becomes more and curvier and the vegetation thicker. Finally, we are in the middle of the forest. On both sides of the road trees and bushes spread out as far as the eye can see. The hilly road always offers breathtaking views. Suddenly it suddenly becomes dark, I didn’t notice a twilight at all. I try to keep my eyes open to experience Madagascar at any moment. Meanwhile, in the back of the bus others are already sleeping. In the darkness we drive on for a long time. Through small villages and towns, we pass Moramanga. The city seems eerie in the darkness, people everywhere, small fires in front of wooden huts, chickens, zebus and dogs between small children and older men. “Moramanga” means not only “where the mangoes are cheap”, but also “where the slaves are cheap”. A relic from earlier times.

Sometime, felt in the middle of the night (in fact it is just 8 p.m.) we reach Andasibe and the hotel Feon’ny ala. The bus parks in the stone courtyard, in the dark I don’t recognize anything. I get a key and the hotel employee wants to take my luggage. I refuse politely. After 20 non-EU-standard steps steeply upwards I realize that this was a stupid idea. And later I learn that the clerk would have been very happy about a small tip. My bungalow is number 303 and in the top row. It’s a nice, spacious wooden cabin with a gable roof made of banana leaves. Inside I find a big bed with mosquito net. After a short cat wash, I am drawn back downstairs. “Just follow the noises and the smell” I was told, I’ll do that. Down the stairs and to the left I find a nice veranda to the right of a house, which is probably the restaurant. And they have fantastic food. Later I fall into bed and can’t fall asleep for a long time. The many impressions buzz through my head, a kaleidoscope of colors, feelings, and smells. In the end, I do fall asleep – it is more coma than sleep.