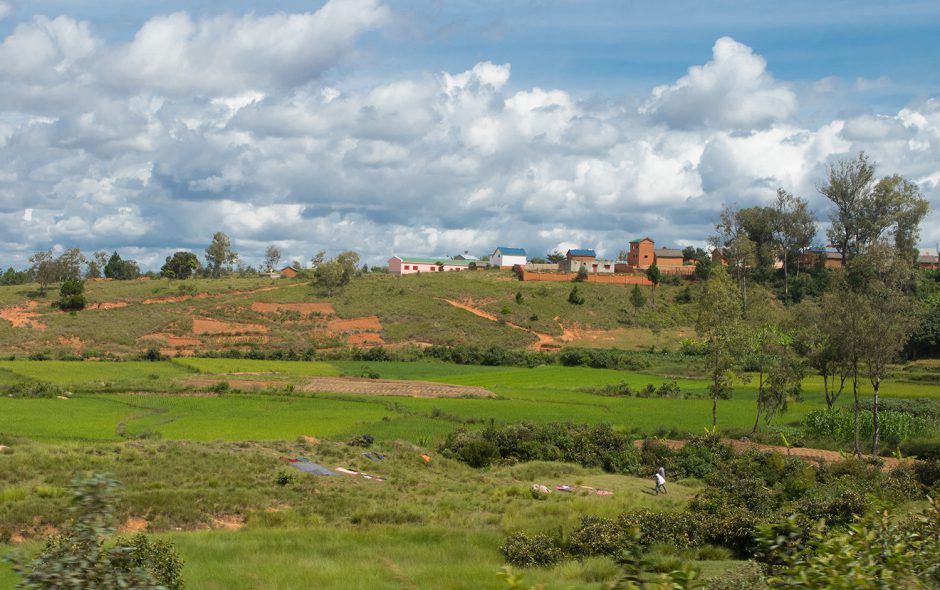 After an estimated two hours of sleep, it is already time to get up again. I am totally tired. Everyone is ready on time at seven. The luggage is ready for loading in front of the door, the backpacks are ready to hand. And then nothing happens. Nothing at all. The traffic in Antananarivo has Dimby and the other guys under control. Or traffic jams, rather. Well, all newcomers will learn about mora, mora in Madagascar. After all, everyone is finally arriving: Gris, Dimby, Jose, Fitah, Leon and Mamy as the old team. Christian is also there, but this time in a double role as a driver and assistant cook. And without his bus. He has brought Andry, a chubby cook with small black glasses on his nose. Andry is still quite shy, but greets everyone with a handshake and is immediately eager to load the suitcases and bags onto the roofs of the cars. And to capture everything photographically with his mobile phone.

Dimby’s mama’s there too, along with Andrianina, Roubinah, and Rosie. With Andrianina’s, I trade a remote-controlled Disney car for a giant bag of mangosteen. Now, that’s a big surprise! I have no idea where to get mangosteen this time of year. My absolute favorite fruit on the island is out of season in March and is only available in the north-east, where it is grown a lot. All the more reason for me to be glad that there was a possibility to get it there… Mika also comes by for a short visit but has to leave right away, as he is currently moving with his family.

This time I am with Tanala and Markus in the car with Gris. We pack the backpacks in the middle, the coloring books underneath ready to hand. Far too late the cars roll out of the gate. Finally, we are off!

In Ambohidratimo we stop for the first stopover. At a gas station – it is Sunday and no supermarket is open – we buy cinnamon rolls, Saltos (the Malagasy Tucs) and cookies. Then we head for the northern highlands. The view is great almost everywhere. Everything is green and as if covered by a velvet cloth. Orange lines and spots break through the green where paths run and cultivated fields lie. Small mud houses and a few rice fields are in between.

Later the landscape changes to low grass tufts and small bushes, then to grass savannahs. In between, we collect a grey Furcifer oustaleti male from the road, which is quickly used for a pee break. In the road bend, the off-road vehicles park in front of a red laterite wall. The first chameleon male of the holiday is a bit battered, he seems to have mouth rot and pinches his left eye. Christian and José find two more females and two males of the same species in the high grass. The females are obviously pregnant, at least that’s what their spherical bodies suggest. For the fact that I hardly ever use my camera at home, I’m doing quite well with photography today. Normally I need one or two days to “shoot in”. A few men stand at the wayside and look over curiously. One of the older men seems to be afraid of the sickly Furcifer oustaleti and quickly takes flight. 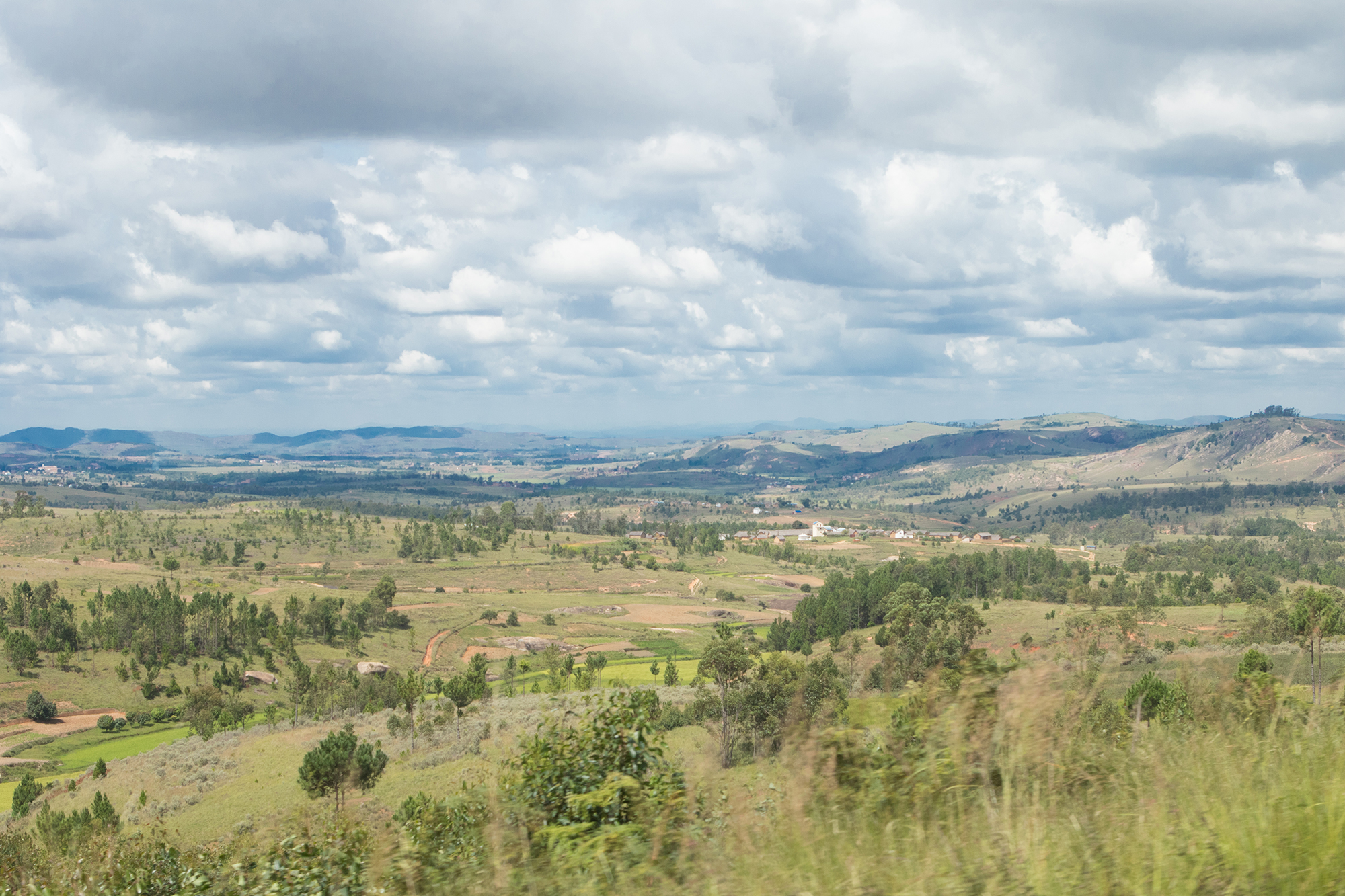 Just after Ankazobe, we have lunch. The Landcruiser and the Starex are parked at the roadside, then we enter the Hotely Nirina, a Malagasy trucker pub. Here simple food is kept warm all day long in huge pots, so you get fast, cheap meals. Inside, chairs and tables are pushed together. I eat rice together with Tanala, the beef tastes really good. Dimby and I give away a few coloring books to a few children sitting across the street in front of a stand made of wooden poles and a plastic tarpaulin on a truck tire. As it is always the case in Madagascar: Suddenly there are many more children. Dimby goes into the backyard of the hotely where we had lunch. Six or seven children, one of them apparently blind on one eye, are very happy about the coloring books and pencils. Meanwhile, the children to whom we gave coloring books on the street quickly bring them to safety with their parents. The mums check the contents of the coloring books as they pass by – after a short nod, the children are allowed to keep them.

Meanwhile, a small truck arrives opposite, pulling an apparently crashed car behind it. Instead of a tow rope or a tow bar, the driver has tinkered something else between the cars: A tree trunk with a thin rope twisted around it. Meanwhile Markus befriends a black-brown dog with floppy ears, whose wrinkled, half-naked skin on his neck looks like mange. But the dog enjoys even the smallest caresses, he doesn’t seem to get that many.

In the afternoon we reach the first valleys full of mango trees. It gets noticeably warmer the further we get from the highlands towards the west coast. We still drive between the valleys on mountain ridges with short grass and little vegetation. One can look for miles into the distance, over completely bare mountain ridges. In the valleys, there are here and there still tiny remnants of primary forest – which species are probably still undiscovered here?

Gris is driving quite fast so that at some point we drive quite lonely through the highlands. Suddenly he brakes sharply. Another chameleon slowly jerks across the road. I get out and collect the animal, bringing it to the roadside. We also save a third chameleon from being run over. The fourth one of the day, Markus accompanies while it is running into the grass at the roadside.

As the sun sets, we are still far away from Ankarafantsika, our daily destination. We drive through a village of huts, which has just market day. Few cars push their way through an endless number of colorfully dressed people and past provisional market stalls. Raw meat and offal are lying on boards and logs. Correspondingly many blowflies buzz through the air. Whole swarms swarm around the stalls where most of the meat is still lying in the heat. Hot chilies sorted into stacks are lying next to them.

Finally, we reach the Betsiboka, the largest river in the west with the bridge over it. In the sky, the clouds pile up crazy. For a very short moment, the sun flashes out again. It sends its last rays of the day over the water and the red stones. A great play of light lies over the roaring water of the river at the end of the rainy season and the adjacent banks. Then the huge cloud mountains swallow the sun completely. Within a very short time, it is dark. In pitch darkness, we drive on, further and further west. When we arrive in Ambondromamy, only a few fires along the road and a few neon signs at gas stations and shops are still lit.

Shortly after eight, we reach the campground of Ankarafantsika. The tires crunch on the gravel, then finally we are there. The boys spurred off to set up tents and kitchen. In the dark. Ndrema greets us, he has been waiting for hours. When I want to use the toilet, the water has to be turned on first. In cabin number one, there are no eight-legged animals, but a centipede, a huge cockroach running around and a fat Phelsuma kochi. Philipp, who slept most of the day, is already running around all over the campground. Also in the dark. I have hardly walked to the kitchen when he has already discovered several frogs and a Blaesodactylus ambonihazo waiting for prey over one of the lamps under the tent roofs. I content myself with arriving and resting. And from time to time I go to the kitchen to see what’s for dinner.

The dinner is fantastic – it was obviously very worthwhile to take the new cook Andry and Christian along as accompanying chef. The majority of the cooking was done by Andry – nobody really knows what Christian actually does in the kitchen. But that doesn’t do any harm to the food. There is grandiosely tender chicken, completely without splinter bones as usual in Madagascar, in a great sauce. In addition, there are baked pastries rolled out with a bottle of rum. A poem!

A little later I fall on the air mattress in the tent and fall asleep immediately.