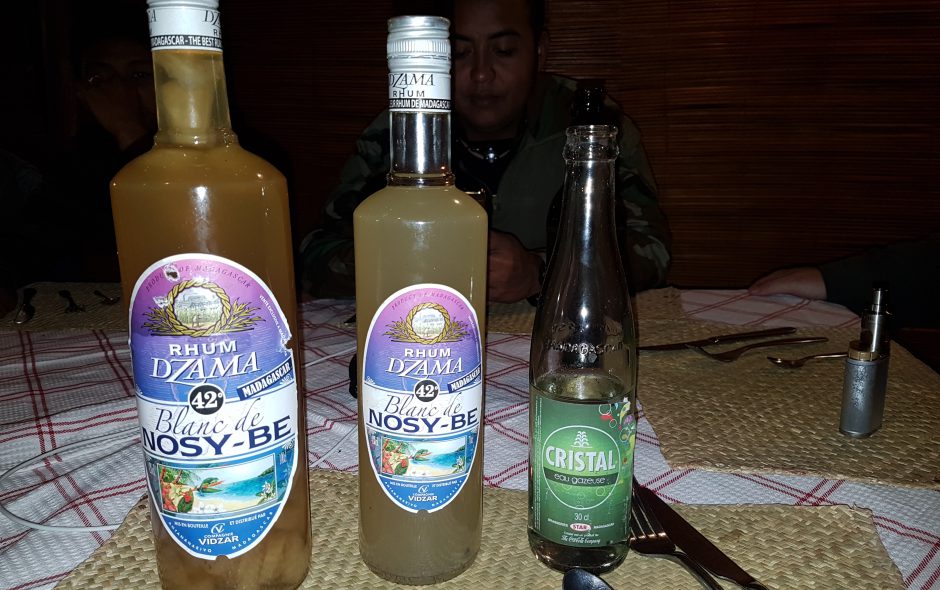 In the morning there’s still storm. The lake makes huge waves and looks almost like the sea from the bungalow. Even the lemurs have retreated into the forest. The wind blows the hammock on the terrace playfully through the air, tearing at the trees and pulling at the leaves of the roof. I pack my travel bag and dash  in the drizzle, wrapped into my jacket, for breakfast.

Dimby announces at breakfast that the boatsman in Manambato has seriously left in this storm. I’m not so sure if he will arrive. “Does everyone still has waaaaatttteeeeer?”, a loud voice suddenly roars in front of the restaurant. The shock subsides, the German “Touritours group” is back. They arrived late yesterday evening. Ecotourism, what’s that stuff? Certainly not this group. Walrus moustache complains loudly that he doesn’t have a television in his bungalow, whereupon he bawls his thighs for the good joke. Two Saxon ladies dress in light blue plastic bags and consider it a glorious idea to encounter cyclone rain with garbage bags.

Thanks to the cyclone I have almost unlimited time to write today, so I don’t want to deprive the inclined reader of the details of the bizarre troupe:

First an older, gray-haired gentleman with an Emperor-Wilhelm-Memorial-Moustache in a striped T-shirt steps into my field of vision, finally even taking out a pipe and puffing it. Then there’s a lady with a blonde mullet, probably from the 90s, in a pink T-shirt and silver glitter pants. She wears a gym bag on her back, whose straps are tangled, and a green, sleeveless rain jacket. Where on earth can you get rain jackets without sleeves? Two somewhat buxom ladies stand out with an extremely Saxon dialect. They both don’t wear bras, but the weight of their breasts has already given way to gravity. Another 90s memorial hairstyle wears curls on the back, a low pony on the front, as well as half-mast jeans and a wool sweater (short reminder: rainforest in the tropics). Her husband has another grey moustache, and he’s also in pants at half-mast. The troop also includes a teacher with the posture of a tortoise, even without a bra, but also without breasts. And a creepy, grey short hairstyle over small metall-rimmed spectacles. She talks to a rather elderly lady in checked trousers, whose main hair is very thin, but all the more bright red. And then there’s a middle-aged woman with black ass-eating trouser leggings and long, enormously greasy hair.

Finally the plastic bags, the rain jacket without sleeves and their whole group disappear into the forest. Or not. It doesn’t take five minutes for the troupe to stand dripping and just as loudly as before in the restaurant again. The mullet blows loudly to come back. Who would have guessed that it was raining outside? During a cyclone?

So far to the refreshing German troop that wants to go to the rainforest today. Due to the somewhat tough events of the day – and because I sometimes feel extremely ashamed of my fellow countrymen and women – I recorded them live and unfortunately to the minute.

8:12 The boatman called from the other side of the lake. He is stuck with the boat on the opposite bank and cannot continue for the time being because the storm is too strong.

8:57 We transfer our group to the lounge in the restaurant. The boatman arrives nevertheless. But he doesn’t want to go on, because the waves have reached enormous heights. Furthermore he is sick of vomiting, what he has obviously demonstrated sufficiently at the stairs that have converted to a jetty.

09:40 The 90’s hairstyle in Bermuda shorts complains about the fact that there is only one kind of cheese for breakfast (spoiler: Nowhere on the east coast there is cheese. No-whe-re. They actually kind of import it here.) And no sausage! Also no Bärchenwurst!  (Hint: “Bärchenwurst” is a German kind of sausage with a smiling teddy bear face. It is usually cut in slices, actually made for children to make them eat more cold cuts. ) And always pineapple for breakfast, that sucks. Lord, please throw brains out of the sky. Or stones. The main thing is that you hit.

10:02 The Germans begin to sing “Einer geht noch”. (Hint: This is an old German drinking song, usually sung by very, very drunk people that are not ashamed of anything anymore). As a precaution I apologize to all Madagascans that I also belong to this nationality. They only nod understandingly.

10:15 The two tour guides have decided to show the Germans some “real local music”. The one with the turban waves with a rattle through the air, the other one drums melodically. I didn’t even know that there are Madagascans without a sense of rhythm. The Germans clap and roar. Before there are the first dead – Guido from Malta already suggests to unpack his semi-automatic – we leave the restaurant and find ourselves a few meters further under the roof outside. It’s raining in. We move the tables. Now it’s no longer the table that gets wet, but only the one sitting under the hole in the canopy.

10:33 The first THB hiss. The leaf canopy has more holes than we thought, to which it rains in quite yieldingly.

10:39 The Madagascans solve the problem with the Germans in their own way. Madagascan music drones from the actually orphaned building site in the restaurant. The German group begins to dance. The Emperor-Wilhelm-Memorial-Moustache cannot clap. At least not to the beat of the Madagascans, only in German four-four time – it just doesn’t fit here at all.

10:43 Rum is on the table. Guido comes back from his bungalow, but without semi-automatic. Two Germans in tight egg-squeezing swimsuits, otherwise naked, run barefoot towards the forest.

10:47 The second glass of rum is tilted. Ho ela velona! The socket under our roof drips with wetness. But it still charges Markus’ mobile phone. For apparent reasons the generator runs much longer than usual.

11:00 Martin leaves our roof with the words “If I don’t come back, don’t look for me”. Lars is somehow longer gone.

11:10 Rum number five. Slowly the Germans become bearable in the restaurant. Or at least I don’t care.

10:36 Dimby brings raisins from his snack stock. The raisins fall into the rum.

12:02 Rum number eight, this time with raisins. Not bad. The teacher with the metall-rimmed spectacles, Lady teddy bear sausage and mullet pass by, closely followed by the red underpants. Tanala nails the windbreak to the back of our seat with a log on a post, because it flies away constantly.

13:09 Lunch. The wind shelter has flown away. The boatman moors his boat again. The waves are even higher, the storm is increasing. But the rain has stopped.

17:49 I go to the bungalow. The storm increases again in intensity, the roof groans alarmingly. Leaves and blossoms blow across the paths through the rain. It rains again, only much more than today at noon. Torrents run down the roof, wash over the terrace and take mud and branches towards the lake. The water stands halfway up the stairs and is still rising.

In front of our bungalow bizarre “emergency plans” are discussed. If trees fall on bungalow no. 2 or 5 or the roof is blown away, those affected should simply come to us, Bungalow 7. Since I happen to know that the bungalows are all constructed exactly the same, I wonder if we will still have a roof when the neighbouring bungalow’s roof flies away. Well. Let’s wait and see. I’m going to sleep now. You can’t do more than that anyway.

20:36 It is suddenly almost windless. The rain has stopped. The silence is spooky.

2 thoughts on “Waiting in the cyclone”